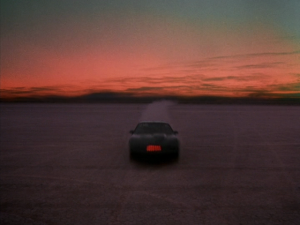 July 8th, 1982: Filming began on the very first Knight Rider story, the feature-length Pilot Episode. Some twenty minutes of the show were already in the can, as select scenes that showed what the series would be about were already filmed as part of a presentation reel for NBC executives, who went on to greenlight the series.

This entry was posted in Anniversary, Knight Rider, Original Series. Bookmark the permalink.