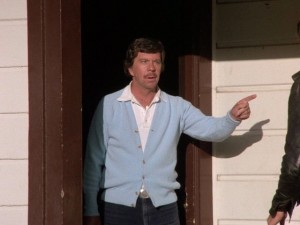 Joe Conley, who made a guest appearance in Knight Rider‘s first season episode Short Notice, died on July 7. He was 85.

Conley was best known for playing general store owner Ike Godsey on 172 of the 212 episodes of The Waltons, and also appeared in all six of the series’ reunion movies. In a 50-year career, his role in The Waltons remained a high point, but he also made appearances in successful shows such as Gunsmoke, Dragnet, Green Acres, Alfred Hitchcock Presents, Lassie, Wanted: Dead Or Alive, The Beverly Hillbillies, The Brady Bunch, and six episodes of Mister Ed. One of his last appearances was in the Tom Hanks movie Cast Away.

In Short Notice he shared a scene with David Hasselhoff, playing the motel manager who refuses Michael entry after his arrest for murder, and calling the criminal justice system “a revolving door.”

He leaves Louise, his wife of 44 years, and children Kevin, Julie, Erin and Jana.