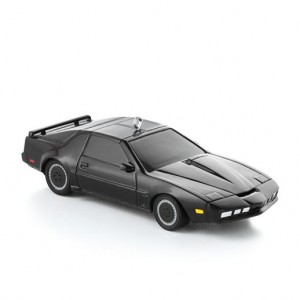 Tomorrow (Saturday, July 13) sees Hallmark release their Gold Crown Exclusive K.I.T.T. Keepsake Ornament! The battery-operated Christmas tree ornament retails for $19.95, and at the touch of a button it scans and talks in the voice of William Daniels!

An ultracool car with an unmistakable voice and pulsing red scanner bar, the Knight Industries Two Thousand (aka K.I.T.T.) was not only Michael Knight’s “ride,” it was his constant, supremely competent partner in the 1980s TV hit Knight Rider. With a self-aware cybernetic processor, four cruise modes, and turbojet power, K.I.T.T. took high-speed computing to the next level… and then some!

It’s a must-have for your Silent Knight, Holy Knight!