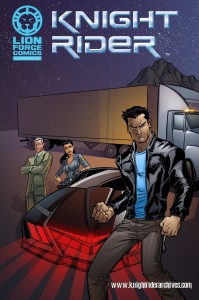 Here at the Knight Rider Archives we have been given a sneak peek at some of the artwork we are going to be treated to for the new Knight Rider comics thanks to Lion Forge Comics and Wonacott Communications.

We hope you enjoy the teaser! The comics are set to be released sometime in October or November this year according to the latest reports. They will be available on Amazon Kindle Bookstore, Apple iBooks, Barnes & Noble’s The Nook Book Store and Kobo.

We have also been allowed access to the original press release giving details of the new comics set for release later this year.

Once again a huge thanks to Lion Forge Comics and Wonacott Communications LLC for allowing us access to this information.

Digital Publisher to Re-imagine Iconic Properties Including “Knight Rider”, “Miami Vice” and “Saved by the Bell”

LOS ANGELES and ST. LOUIS – July 2, 2013 – NBCUniversal, one of the world’s premier media and entertainment companies, has partnered with digital publisher Lion Forge Comics to develop licensed comic books based on popular TV shows from the 1980s and 90s.

Under the agreement licensed through the NBCUniversal Television Consumer Products Group, Lion Forge will write, develop and publish digital comics based on the following shows:

“Partnering with the team at Lion Forge to bring classic TV properties to life in graphic novel format was a natural step for us as we continue to identify new ways to entertain our fans in the digital space,” said Chris Lucero, director of Global Consumer Products Licensing for NBCUniversal Television. “We’re excited to give fans a chance to revisit some of their favorite shows and characters in a completely new way.”

Currently, Jason Johnson (Wetworks, Godstorm) and Lion Forge’s own Carl Reed and Lorenzo Lizana are on board as artists.

“From hugely popular characters such as Crockett and Tubbs, Zack Morris and Punky Brewster to highly stylized music and clothing choices, these TV franchises have had a significant impact on pop culture,” said David Steward, CEO, Lion Forge. “We here at Lion Forge are looking forward to extending that influence by creating visually appealing and entertaining experiences on mobile devices for a whole new generation of fans.”

The comics are planned for distribution in Q3 and Q4 2013, and will be available through the Amazon Kindle Bookstore, Apple iBooks, Barnes & Noble’s The Nook Book Store and Kobo.

Lion Forge executives will participate on a panel at Comic-Con International: San Diego from 6:30 – 7:30 p.m. PDT on Saturday, July 20, in Room: 26AB (SDCC), where they will discuss these and other properties in development.

Lion Forge is a St. Louis-based transmedia studio with a focus on digital publishing.

With both original and licensed titles, Lion Forge brings together the brightest talent to acquire and develop content and character franchises within the comic book, television, film and interactive gaming industries. Lion Forge applies cinematic elements to each property to create compelling, story-driven experiences from start to finish, bringing unique entertainment experiences to both traditional and digital marketplaces. For more information, please visit www.lionforge.com or the Lion Forge Facebook and Twitter pages.