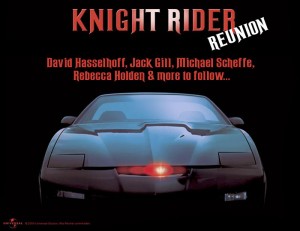 Knight Rider fans in the Los Angeles area have the opportunity to be a part of something truly special in October: The Hollywood Show has assembled a reunion of celebrities associated with the series, including David Hasselhoff, William Daniels, Rebecca Holden, Ann Turkel, stuntman and second-unit director Jack Gill, and K.I.T.T. designer Michael Scheffe!

More guests are expected to be added to the lineup, with series creator Glen A. Larson a possibility, but he currently remains unconfirmed.

A cast reunion wouldn’t be complete without an appearance from the Trans Am, but don’t worry… they’ve got that covered! David will be bringing his personal K.I.T.T. replica, and Knight Rider fan Jennifer Catano will also be bringing her replica!

This once-in-a-lifetime Knight Rider Reunion event will be held on October 4th-6th at The Westin Los Angeles Airport, 5400 W Century Blvd, Los Angeles, CA. The Hollywood Show is the best-known autograph show in the Hollywood area and is held four times a year with actors, writers, performers, collectors and celebrities coming together to meet fans and autograph pictures and merchandise. They are also hosting reunions for Baywatch, Knots Landing and the children of The Sound of Music at the same event.

More information can be found at the Official Website, including printable guest list, prices and booking information.