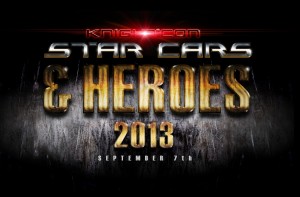 Saturday, September 7th saw the return of KnightCon to Castleford in Yorkshire, England. Taking place at the Xscape complex – its home for the last 3 years – KnightCon gave Knight Rider fans from around the world the chance to meet, share stories and experiences about the show, and spend time with series star Rebecca Holden! This was Rebecca’s fourth visit to England for KnightCon, and she took part in a special meet-and-greet at the VIP Party, posed for countless photos and signed autographs, and also took to the stage for an extended Q&A session. 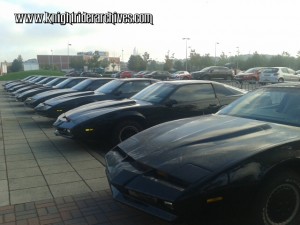 The event also featured the largest collection of Knight Rider replicas in the country, with a display of customised Trans Ams based on K.I.T.T. from various seasons of the show. Replicas made the trip from all across the country, from the North in Newcastle and the South in Devon, and even as far afield as the Netherlands. As usual, these cars got a lot of attention as they made their way to the event!

Just passed the Knight Rider car on the M25. My parents weren't as impressed as I was! I wonder if it had KITT? 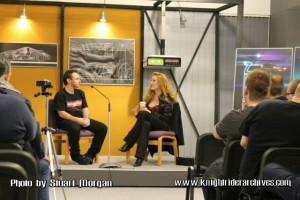 Rebecca Holden at the KnightCon Q&A
(Photo by Stuart Morgan)

Saturday afternoon saw our marathon Q&A session with Rebecca herself, where for 2 hours KnightCon Intimate Platinum pass-holders could take part and learn about Rebecca’s experiences during her time on the show, her thoughts about the character of April Curtis, and her memories of the cast and crew. She also shared lots of interesting stories about her life and career, and her plans for the future. Look out for a transcript here soon!

Elsewhere, the event has evolved into Star Cars & Heroes, and fans could admire replica vehicles from Back To The Future, GhostBusters, Batman, Green Hornet, The Dukes of Hazzard and Only Fools and Horses. Optimus Prime and Bumblebee tour vehicles from the Transformers movies drew large crowds of excited families, as did the James Bond Aston Martin DB5 and the 30-foot Stay Puft Marshmallow Man from GhostBusters that towered over the event! 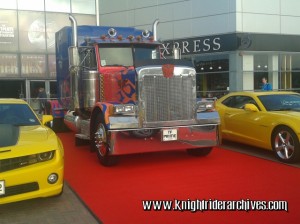 The event broke all attendance records for the Castleford Xscape with over 40,000 people coming to the event!