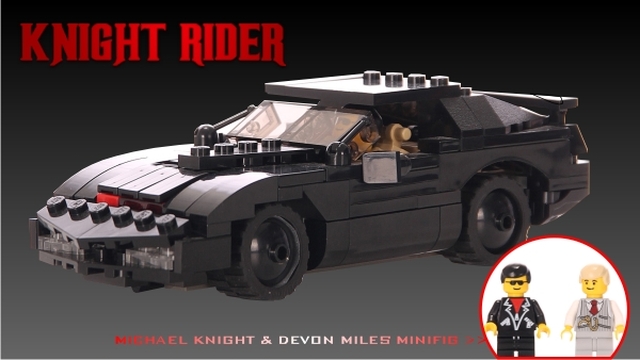 Lego Cuusoo is a website which allows users to submit ideas for Lego products to be turned into potential sets available commercially. User Stanley-Efu has created a fantastic Knight Rider set – still at the idea stage – that consists of K.I.T.T. and two mini-figure versions of Michael Knight (David Hasselhoff) and Devon Miles (Edward Mulhare).

I designed and build a 7-wide minifig scaled model of K.I.T.T. with only original LEGO bricks.
Buy using SNOT-technique (Studs Not On Top) I placed the lower midsection upside down to create the smooth curved shapes. Enjoy this model!

The LEGO CUUSOO Knight Rider project currently has 346 supporters, but it needs a lot more than that. Once the project reaches 10,000 supporters, it is reviewed by the Cuusoo team who then decide on whether to produce it. The Cuusoo team also comments on project’s pages when they have 1,000, 5,000, and 10,000 supporters. These comments include feasibility, what is happening next, and anything they can think of to help it pass the review.

Get behind this great set here, and let’s get this into stores!