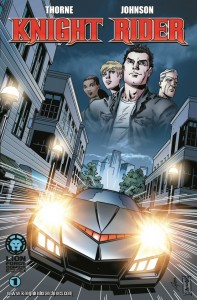 After rolling out exclusively on the ComicsPlus app on Wednesday, Lion Forge’s digital Knight Rider comic will now reach a wider audience after being released for Kindle! It’s currently only available in the United States, and has a price of $2.99.

Despite official protocol, F.L.A.G. Agent, MICHAEL KNIGHT thinks the one thing the brilliant Dr. Katherine Beachum needs most is a night on the town, away from the lab and her ultra-secret research project. Everything’s going fine until a squad of gun-toting mercenaries crashes their party.