With the first issue of Knight Rider now available to purchase we have been privileged enough here at Knight Rider Archives to have the opportunity to interview Knight Rider digital comic editor, senior editor at Lion Forge Comics Shannon Eric Denton.

A huge thanks to Shannon for sparing us the time to answer our questions regarding the latest Knight Rider franchise. Questions and replies below, we hope you enjoy!

Once again a huge thanks to Wonacott Communications LLC and Shannon Eric Denton, senior editor at Lion Forge Comics for sparing us the time to answer our questions and making this interview possible. 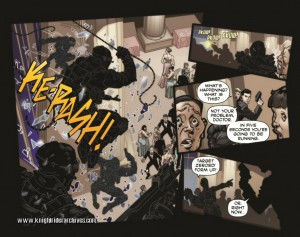 An extract from issue #1 can be seen above. We hope you enjoyed the interview and we look forward to issue #2 in November.

Keep those scanners peeled for more updates to come regarding issue #2!