Knight Rider fans have been looking forward to a high-definition release of the show since the introduction of the format, and now lucky fans in Japan can own every episode of the series – plus the Knight Rider 2000 and Knight Rider 2010 TV movies – in crystal clear 1080p! Can a US and European release be far behind?

Current available specs for the set are:

Those specs state that audio is yet to be announced, but a precedent has already been set: Universal have already released a Complete Series Blu-Ray collection of their popular mystery series Columbo for the Japanese market – and that series included a Japanese language track in addition to the original English mono; it’s not a stretch of the imagination that the Knight Rider set will receive the same treatment. 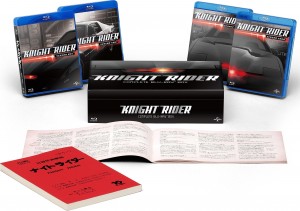