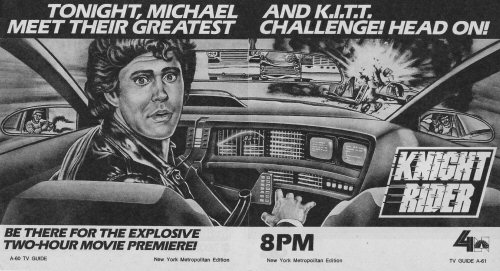 Goliath saw Michael and K.I.T.T. face off against their greatest enemies: Garthe Knight (David Hasselhoff), son of Wilton Knight and the model for Michael’s face, and his 14-tonne, 18-wheeled monster truck Goliath – coated with the same indestructible chemical formula as K.I.T.T.

The episode was filmed on location in Las Vegas, Nevada, and is a time capsule of the famous Las Vegas Strip in that era. Many scenes were shot at the Caesar’s Palace Hotel and Casino, including Michael Knight’s first meetings with his evil twin. 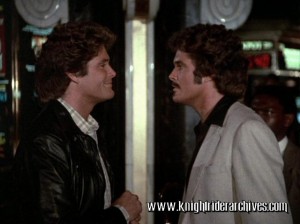 David Hasselhoff has fond memories of Goliath, and recalls: “Everybody remarks on [that] episode — honest to God, everybody does. And when I was doing it with my little earring, I thought I am never going to work again. And when my father saw it he said, ‘Michael Knight’s evil twin is a better actor than Michael Knight!'”

Goliath proved to be hugely successful – the highest-rated episode of Knight Rider‘s entire run on NBC – and remains a firm fan favourite to this day. Garthe Knight and Goliath returned to wreak more havoc in Goliath Returns later in the second season, and this episode also became the template for the series’ later season premieres.