It’s November, and you’ll probably have noticed once clean-shaven men suddenly sporting facial hair. The month of November is now synonymous with Movember, a fantastic worldwide charity movement where men grow moustaches in a bid to raise awareness for men’s health – specifically prostate cancer, testicular cancer and mental illnesses. It’s also a cause worthy of the Knight Rider himself – something where every man has an opportunity to make a difference! It’s brilliantly retro: The 1980’s were, of course, the era of hirsute heroes like Magnum, PI, Matt Houston and Riptide; while the star of Knight Rider was clean-shaven, many of the show’s bad guys sported facial hair above the lip.

Below we have a guide to some of the greatest whiskers in the history of Knight Rider, and hope it provides the perfect inspiration to anyone wishing to take part in this year’s Movember! (More details at the end of this article.) 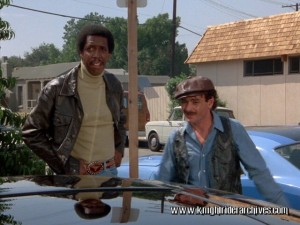 These two have the distinction of the first ‘taches in the history of Knight Rider, and kickstarted the trend of the moustache signposting shady characters. Jackson (Michael D. Roberts) sports a stylish, early-’80s pencil moustache, while Browne (Bert Rosario) flaunts a chevron. The inherent coolness of their facial hair isn’t enough to prevent their capture by K.I.T.T. however: the car sends the tufted thieves directly to jail. 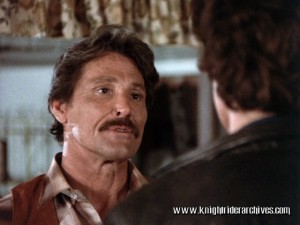 The moustache isn’t just shorthand for a bad guy… it’s also the universal Hollywood signal for membership of an evil biker gang! Short Notice features Knight Rider‘s second bunch of criminal bikers – but brings with it some superior facial hair: Harold T. Turner (William Smith) is the head of the diabolical ‘Satan’s Stompers’, and gives Michael Knight a hard time with the aid of his streetfighting skills and (appropriate) biker moustache. This nasty piece of work almost brings Knight Rider to an end with its first season! 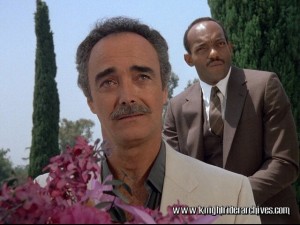 Boyd Lasalle (John Considine) was one of the most devious villains Michael and K.I.T.T. ever faced, and this Southern sophisticate wore a ‘major’-style moustache on his top lip. His first henchman Danton (Ken Foree) followed his lead by sporting an evil walrus. Foree and his whiskers returned to Knight Rider the following season in Redemption of a Champion, and Considine would return in the fourth season premiere Knight of the Juggernaut with a full beard! 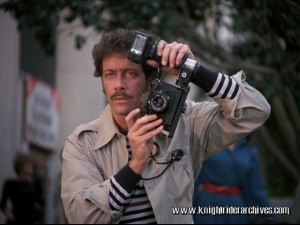 This comic relief character sports a chevron moustache that feels like it wants to evolve into a Salvador Dali. Actor Guerin Barry is also a voice over artiste, and sports a stylish moustache to this day. 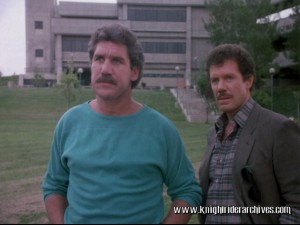 These two amoral characters hide behind their evil painter’s brushes. Mark Taylor (Alan Feinstein) is the lead bad guy and owner of the L.A. Cougars football team, and drives a supercar of his own that can give K.I.T.T. a run for his money: The Dagger DX. Bloodworth (Tim Rossovich) is his right-hand-man, cleaning crime scenes, rupturing fuel tanks and starting illegal street races. In spite of their superior facial hair, they aren’t a match for Michael and his former partner, the similarly painter’s brush-sporting Sgt. Jim Courtney (Cliff Osmond).

Alex Webster (Not a Drop To Drink) 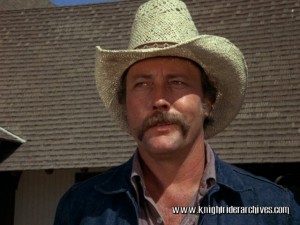 Alex Webster (Dave Cass) in Not a Drop to Drink

Alex Webster (Dave Cass) works for Herb Bremen, a land owner trying to start a range war over water rights. In between setting explosives, brawling with Michael Knight and arguing with his incompetent brother, Webster cultivates an impressive horseshoe – perfect for the Western feel of this episode. Dave Cass returned to Knight Rider two years later (with his horseshoe grown into a full beard) in Season Three’s Knight By a Nose. 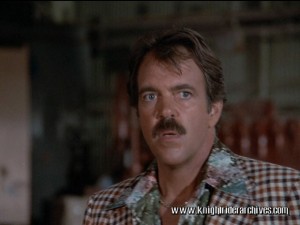 Tony (Michael MacRae) began this classic episode of Knight Rider as little more than an unshaven hobo, but cleaned himself up with the aid of K.I.T.T.’s evil doppelganger K.A.R.R. He kept his distinctive walrus moustache; like Hasselhoff’s Garthe Knight later on, the facial hair helped distinguish this character from Michael Knight (in this case when he was behind the wheel of the Trans Am).

C.J. Jackson (Knight of the Drones) 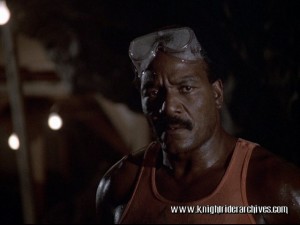 C.J. Jackson (Jim Brown) in the third season premiere Knight of the Drones

Only a mustachioed bad guy could kill an agent of F.L.A.G. Meet C.J. Jackson, murderer of Michael Knight’s predecessor Ken Franklyn, as played by NFL legend Jim Brown. C.J. Jackson is a formidable foe, whether busting out of jail with the aid of Dr. Halston’s Drone car (we think he’d have got out of there eventually anyway), intimidating the feeble Peter Wong (Evan Kim), or seducing sexy Silver Phantom-driving Babette (Eva Gholson). Anything is possible with this Magnum-style chevron!

This ‘tache-heavy episode also featured an honorable mention from prison guard Carter (Arnie Moore), and a true highlight from… 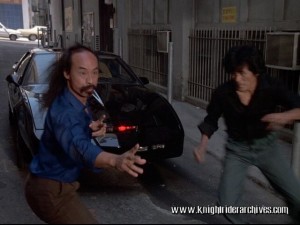 The Karate Twins (Al Leong, left) in action in Knight of the Drones

…One of the greatest ‘tache-wearing bad guys from 1980’s Hollywood: stuntman and actor Al Leong features in a small role sporting his evil Fu Manchu moustache! The confidence to wear this moustache is supreme… Leong’s Karate Twin not only takes on Michael Knight with his Kung Fu fighting moves, but also attacks K.I.T.T. with his bare hands! He would later face off against The A-Team, Die Hard and Lethal Weapon. 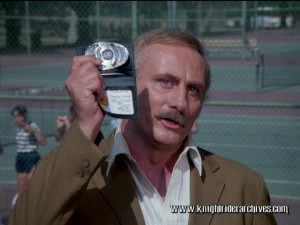 Lt. George Barth (Jack Starrett) is a man obsessed. He is chasing an elusive cat burglar with nothing more than his badge, his gun, and his copstache. Starrett also appeared in the first season episode The Topaz Connection as the evil Hagen, and later in the fourth season episode Sky Knight, as a shady sheriff. He brought his moustache with him both times, though in Sky Knight it was joined to a beard. 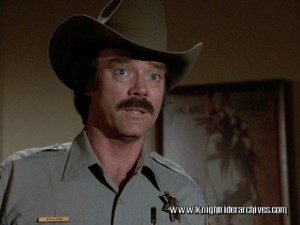 Sgt. Wallace (Ted Markland) is a corrupt, small-town police officer who works for a criminal judge – think a slightly less buffoonish version of the legal contingent of The Dukes of Hazzard. He and his copstache illegally bust Devon for a false traffic violation involving a hidden speed trap. When the FLAG executive witnesses a brutal prison beating result in murder the hirsute cop finds himself desperately trying to cover up the situation. 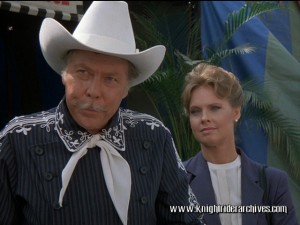 Buck Rayburn (Albert Salmi) is the owner of the Longhorn – a customised stretched limo he entered in the Barton Springs Custom and Classic Car Show. To match his luxury car, he wears a luxurious petit handlebar under his nose. 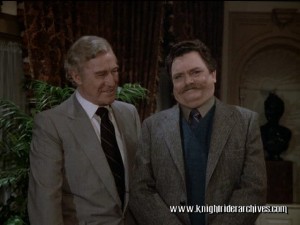 Not a villain, but certainly a threat to our favourite characters, Commander Smythe is a slightly… eccentric… British Army man with whom Devon served during the War. Played by veteran English character actor Bernard Fox, Cmdr. Smythe carries with him an impressive, bristly imperial, completely in keeping with his status. Unlike some of the ‘taches in this list, the imperial was entirely Fox’s own – he sported it in appearances on other shows from The Fall Guy to Bewitched, and Hart to Hart to The Dukes of Hazzard. 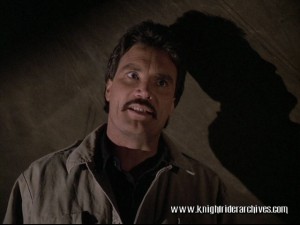 Wilson (played by Vernon Wells) has the distinction of being the only Antipodean Knight Rider villain, and he brought with him a painter’s brush from the Southern Hemisphere. Wells and his bad guy ‘tache took on Arnold Schwarzenegger in Commando prior to their Knight Rider appearance.

Durant (The Scent of Roses) 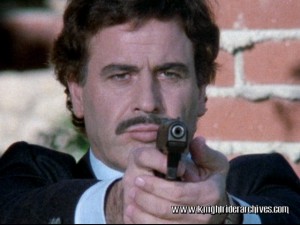 Durant (Aharon Ipale) chooses to wear a ‘tache as part of his disguise when he assassinates Stevie – now Mrs. Michael Knight! This automatically makes it one of the most memorable ‘taches in Knight Rider history and is burned into the memory of Knight Rider fans around the world.

It’s not too late for you to join in and get involved! Visit the Official Movember website for more information and details on community projects. This is truly a cause where not just one, but EVERY Man Can Make a Difference!

What is more Knight Rider than that?

* Movember rules from Movember United States and The Movember Manifesto.