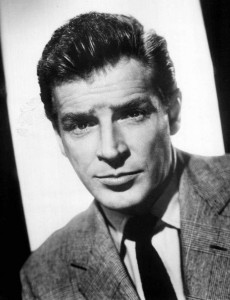 “Knight Rider: a shadowy flight into the dangerous world of a man who does not exist. Michael Knight, a young loner on a crusade to champion the cause of the innocent, the helpless, the powerless, in a world of criminals who operate above the law.”

Today (August 31) would have been Richard Basehart’s 100th birthday, and we couldn’t overlook the centenary of the actor who played the pivotal role around which the entire mythology of Knight Rider is based. Basehart played Wilton Knight, the dying multi-millionaire who designed and built K.I.T.T. (and K.A.R.R.), fathered Garthe, founded the Foundation for Law and Government and bequeathed to Michael Long the belief that “One Man Can Make a Difference!” 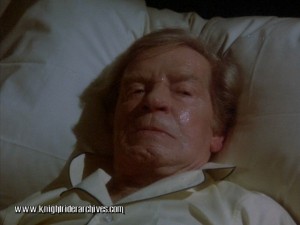 Basehart was born in Zanesville, Ohio, and spent much of his early childhood in an orphanage because his mother died due to complications from childbirth. His father was Harry Basehart, a newspaperman who edited the local Sunday Times Signal publication, and struggled to balance the demands of his career and raising five small children.

Young Richard originally had ambitions to follow his father into journalism, and after graduating from high school he established himself as the hottest cub reporter on the paper – even uncovering a scandal at City Hall that toppled the administration. He lost his job after an altercation that ended with him punching a detective involved with the case in the face. Forced to search for new opportunities, he remembered the fun he had as a 12 year-old playing with the local Wright Players Stock Company and resolved to look for acting opportunities. It wasn’t long before he was accepted into Philadelphia’s famed Hedgerow Theater where he went on to play an astounding 40 roles in just five years, cutting his teeth on everything from Shakespeare to George Bernard Shaw. (Fellow Knight Rider guest star Logan Ramsey, who appeared in No Big Thing and Knight Strike, also began his professional acting career at the Hedgerow.)

After a stint on Broadway he came to the attention of Hollywood, and in 1947 he made his film debut in Cry Wolf alongside Barbara Stanwyck and Errol Flynn. That began a successful and varied screen career of almost four decades’ duration. He selected his roles carefully to avoid typecasting, while recognising that “I couldn’t be a straight leading man. You’ve got to be bigger and prettier than I am.” As a result, he found a niche playing heroes, villains, the mentally disturbed, and many other types, often in a rugged and forceful manner. Besides making the occasional stage appearance, he further stretched his talents by performing in many European films, most notably Fellini’s La Strada (1954) in which he gave a sensitive performance as the Fool. Other roles include Ishmael in Moby Dick (1956) and the title role in the black-and-white film Hitler (1962). He also appeared frequently on television including a long stint on Voyage to the Bottom of the Sea opposite yet another Knight Rider guest star, David Hedison (Knight in Retreat). 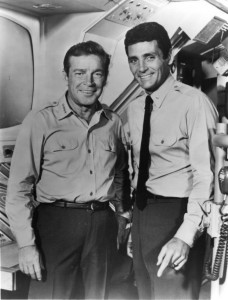 Other notable appearances include guest spots on Rawhide, Naked City, Route 66, Lost in Space, Ironside, The Alfred Hitchcock Hour, Hawaii Five-O, Columbo, Marcus Welby, MD, The Streets of San Francisco, and Vega$. There were also memorable turns as an Irish sailor who courts a widow in Gunsmoke (‘Captain Sligo’, 1971), an abusive schoolteacher in Little House on the Prairie (‘Troublemaker’, 1976), and a stranded spaceman on The Twilight Zone (‘Probe Seven – Over and Out’, 1963).

One of his most famous roles – certainly to readers of this site – was as Wilton Knight, the billionaire benefactor responsible for sending Michael (David Hasselhoff) on his quest for justice in Knight Rider. What might surprise many fans is that Basehart’s role amounted to little more than a few day’s filming; his scenes were rushed into production for a presentation reel to sell the show to NBC network executives, and later incorporated into the feature-length pilot. It’s testament to the actor that the role had so much weight as to be a presence felt throughout the series, and even appearing in flashback in the 1991 reunion movie Knight Rider 2000. “Richard Basehart [was] a classic actor,” says Glen A. Larson. “To get him to play the father figure, and any time you can take a ‘bullshit premise’ and cast it up and give it some dimension, Basehart was automatic.”2 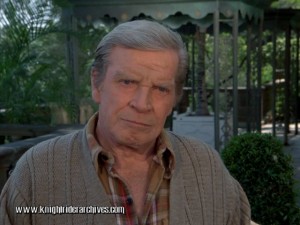 Like his Knight Rider character, Basehart created a non-profit, philanthrophic organisation that highlighted his compassionate side. In 1971, whilst driving along a busy Los Angeles freeway, Richard and his wife Diana watched in horror as someone in a car ahead of them nonchalantly tossed a dog out of the car window to a grisly death. Both Richard and Diana were animal lovers and very aware of the daily cruelties that so many animals endured. Their shock and outrage that day motivated them to gather fellow actors and members of the community together to work to stop such inhumane treatment, forming Actors and Others For Animals which operates to this day.3

Another cause that was championed by the Baseharts was the wellbeing and treatment of senior citizens. They appreciated that both animals and the elderly were frequently ignored and outcast. Actors and Others went on to establish The Richard Basehart Fund to help seniors and their pets. Please consider making a donation to this wonderful charity.

Basehart passed away in 1984 at the age of 70 following a series of strokes. His distinctive voiceover continued to introduce Knight Rider for its remaining two years until its cancellation in 1986. Just a month before his death, Basehart was the announcer for the closing ceremonies of the 1984 Summer Olympics in Los Angeles, and can be heard at the 02:35 mark of this video:

He is buried at Westwood Village Memorial Park Cemetery in Los Angeles. His grave is inscribed with the words “His like shall never come again.” He is also remembered with a star on the Hollywood Walk of Fame at 6250 Hollywood Blvd.

“One Man Can Make a Difference, Michael.

Michael Knight, a lone crusader in a dangerous world… the world of the Knight Rider.”