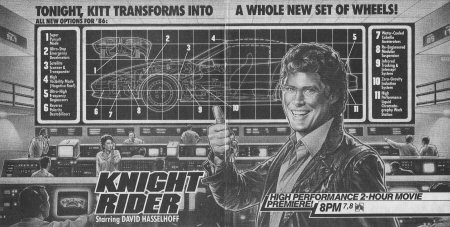 It’s now 28 years since Knight Rider drove into its fourth season with the feature-length episode Knight of the Juggernaut!

Written by Robert Foster and Burton Armus, Juggernaut saw Michael and K.I.T.T. facing one of their most dangerous foes – an anti-assault vehicle with an explosive ramrod that was created by a Third-World terrorist. Taking its cues from some of the more popular elements of the earlier Goliath episodes, Knight of the Juggernaut is considered by many to be one of the last great Knight Rider shows, and ranks as a firm fan-favourite. It is also notable for introducing two major new features to K.I.T.T.: Super Pursuit Mode (SPM) – an altered configuration of the Trans Am with added wings and spoilers resulting in a 40% increase in speed – and the ‘C’ Mode, which folds the roof back and makes K.I.T.T. a convertible.

Making his debut in this episode was Peter Parros, who played Reginald Cornelius III (RC3), the new member of the team. RC starts out as a Chicago vigilante, ‘The Street Avenger’, who cleans up the streets with his fists and a dummy rifle made of rubber. Actor Peter Parros beat competition including Blair Underwood (who also guest-starred in the show) to the role; he told us that he won over the producers after his audition by rapping to the producers: “I’m badder than Mr. T., and prettier than Muhammad Ali, so hire me for RC3!”

Keep your scanners peeled for more on Juggernaut coming soon!