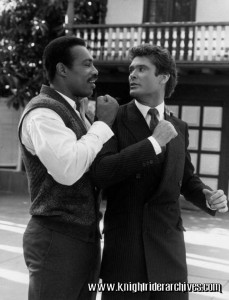 Former US heavyweight boxing champion Ken Norton, who played Bo Keeler in the 1986 Knight Rider episode Redemption of a Champion, has died at the age of 70, according to his son. He had been in poor health following a series of strokes, and passed away of congestive heart failure in a care facility in Las Vegas, Nevada.

Norton famously beat Muhammad Ali as a 15-1 underdog in their first bout in San Diego, in 1973, breaking Ali’s jaw in the process. He would face Ali two more times, the last being a controversial encounter at the New York Yankee Stadium in 1976, where Ali won a narrow decision to retain the title.

Norton began boxing during his time in the US Marines, where he compiled a record of 24-2 with 22 knockouts and won three All-Marine Heavyweight titles. He turned professional shortly after he left the military in 1967.

He won a heavyweight title in 1977, but lost it the following year in a classic 15-round fight with Larry Holmes.

After his boxing career ended, Norton appeared in several movies and became a fight commentator. He also appeared in episodes of The A-Team and Cover-Up before guesting on Knight Rider. Appropriately, Norton’s episode of Knight Rider had a boxing theme: Norton played Bo Keeler, a former champ with a brain injury who is being lured back into the ring by a devious promoter. Don King, Carlos Palomino and Danny Lopez all made special appearances, as did Jerry Quarry, who Norton beat in five rounds (TKO) in 1975. I was fortunate enough to speak to him at a sports convention in Birmingham, England in 2009, and he had nothing but good memories from his appearance on the show.

He had five children. Ken Norton, Jr. went on to play professional football as a linebacker with the San Francisco 49ers and now coaches in the NFL for the Seattle Seahawks.

You can read more about Norton’s life and career at his Official Site, and a Career Factfile at Sky Sports.